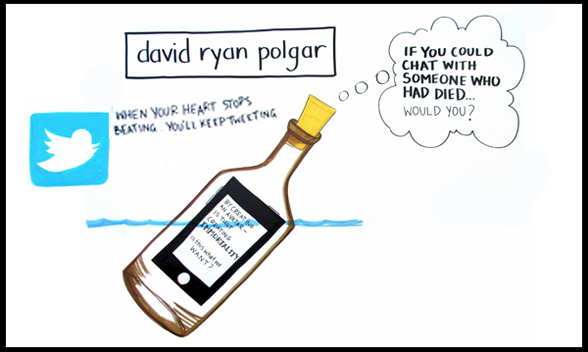 Post-death communication is a modern version of the Ouija Board. But have we forgotten one of our most important virtues: how to be human? That’s the reassuring slogan from LivesOn, a young British company that promises to send out new bite-sized missives in your “voice” long after you’ve expired. By giving an entirely new meaning to an online presence, LivesOn gives you the chance to forever expand your personal brand.

Death, it seems, is no excuse to let your Klout score decrease.

We are saying goodbye to the days when you could die with a certain modicum of dignity, safely enclosed six feet under. Days when you were only disturbed on important anniversaries by friends and family with heavy hearts and flowers in hand. Moving forward, death may be a mere hiccup in your digital footprint—notated not as the end, but perhaps just a significant event on an indefinite timeline.

Today the dearly departed are leading increasingly robust lives online. While one’s physical body may leave the earth, that person has left behind a body of words, photos, and videos that remain online. Instead of the physical world where we clearly separate the living and dead, the online world is quite ambiguous as to who actually has a pulse. If everyone is tweeting, who’s heart is beating? Does it even matter?

I haven’t heard from my dad since January 2013, when he passed away from pancreatic cancer. No new emails in my inbox, or tweets in my feed. Not a word. Death has brought complete silence. There are many days that I wish—expect, perhaps—a new message from him. Reminders to get new snow tires, pick up firewood, or check out some of his underwater photos. For a man noted for his gallows humor, post-death communication would seem to open up a world of comedic possibilities. Alas, nothing.

As a human, there are countless moments where I wish that I could continue the father-son conversation. As a human, I am a mess of conflicted and often irrational desires and impulses. Given the opportunity to erase the permanence of death, I am sure there are many times I would take it. But there is often a crucial distinction between what we can do with technology and what we should do with it.

I can still hear the straining, staccato breathing of my father as he lay in a hospital bed in Philadelphia. By the time I arrived, he had lost the ability to communicate. Instead of words, it was the in-and-out of wheezing for hours on end, the warmth of his hand, and slight thumping of his pulse. He was clearly fading away, and everyone surrounding his bed was left wanting just one more moment to communicate. All of my willing throughout the day and night, and into the next morning, was met with the same strained stare and painful wheezing.

All I wanted was one more chance to talk. Instead, his breathing eventually stopped.

The prospect of post-death communication is almost too good to be true. It offers a modern version of the Ouija Board: the promise of hearing from the deceased, mixed with a slight discomfort as far as attribution goes. But hey, who isn’t a little curious? I would love to talk to my dad. The issue, like the Ouiji Board, is do we accept the words as authentic? And if we do, what does that say about us?

Eterni.me is an endeavor out of MIT that sets out to continue the conversation after one of the parties has departed. By using Artificial Intelligence (AI), an avatar based on the life experiences and writing patterns of the deceased is created. Under their program, I could Skype with my “dad.”

We are at a pivotal time in history where rapidly-expanding AI is thrusting forward some thorny philosophical questions. If I am Skyping with my dad next year, does that mean I am reducing him to an algorithm? Is being human a discernible pattern?

I certainly hope not. As humans, I deeply believe that we are more complicated than code. Skyping with my dad, while tempting, would offer a poor facsimile of what I really desire — him. In my own quest to continue his life, I would be dramatically reducing his very specialness I crave.

One of the greatest contradictions in life is the constant search for ways to massively extend it — but it is in fact the arbitrary and capriciously nature of life, its fragility and impermanence, that makes it so damn beautiful. In the pursuit to hold on and continue the conversation, we may be forgetting one very important ingredient: how to be human.

David Ryan Polgar is a digital lifestyle expert who explores our relationship with technology from a legal, ethical, emotional, and sociological perspective. Having a background as an attorney and educator, he brings a unique viewpoint to tech commentary, emerging trends, and as the Communications Director for the startup Copilot Family. Find him on Twitter @TechEthicist.