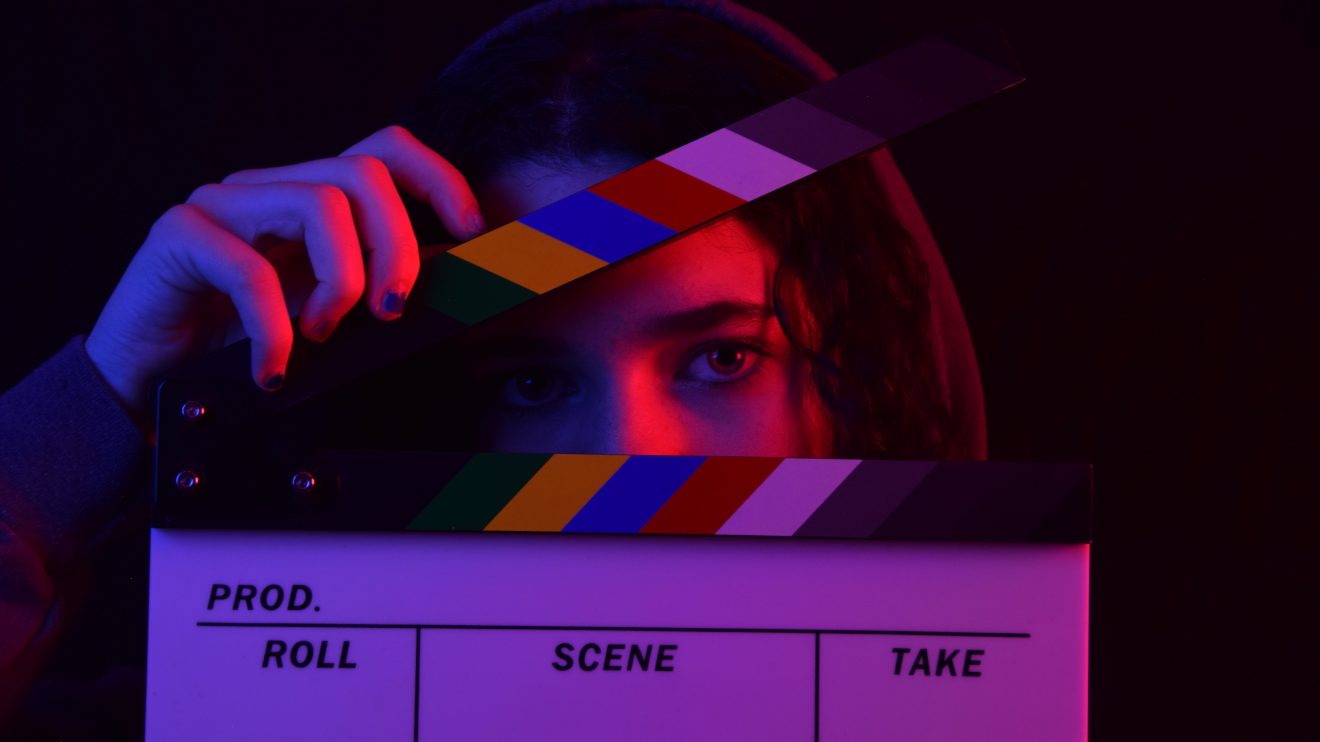 If the lack of strong women in film today makes you want to throw things, maybe it’s time for you to look for films from another era.

You may think older films are archaic and have nothing to offer modern women. Au contraire, ma soeur. In this series of articles, I’ll highlight a few films from decades past that show women as leaders in the home, the classroom, the boardroom, and on screen.

These films from the 1930s, 40s, and 50s offer fully realized characters, well-written stories and dialogue, and most importantly, strong women’s roles. Give these decades a shot and you’ll be pleasantly surprised.

Pre-code films feature a slew of strong-willed women working, drinking, carousing and generally acting as well or as badly as men. Message films about pre-marital sex, rape, addiction and abortion were also popular. The period ran until mid-1934 when the Motion Picture Production Code, or the Hays Code, as it was popularly known, attempted to tame Hollywood movies by forcing them to adhere to a strict moral code. Will H. Hays ran the watchdog organization that created it from 1922-1945. The Hays Code was voluntary before 1934 until Hays’ appointment of Joseph Breen changed all that. Breen enforced the code to the letter, ensuring law, society or karma HAD to punish wrongdoers. If a criminal, philanderer or even a regular guy or gal transgressed in the first act, they paid for it in the third.

Before all that enforcement began, however, it was party time. Norma Shearer, Myrna Loy, Jean Harlow, Kay Francis, Joan Crawford, Ruth Chatterton, and Barbara Stanwyck all acted in pre-code films where they had careers and affairs, committed and thwarted crimes, and generally, acted like human beings. These films are sexy, controversial and short. Many pre-code films clock in at under 75 minutes, so they won’t suck up too much of your copious free time.

Kay Francis stars as a magazine editor who hires a male secretary, the handsome David Manners. They work long hours together and fall in love even though Francis is married to a useless party hound and Manners is engaged to a silly, unsophisticated woman. Will Francis and Manners stay together, or will they continue in their dysfunctional relationships and see each other on the side? I’ll never tell.

Francis is a smart, powerful woman who says what she thinks and runs her magazine with strength and intellect. She’s also a human being and it’s great to see a woman executive be a leader and a person. Kay Francis was the highest-paid film star and the most popular female actress at Warner Brothers from 1930 to 1936. She played executives, scientists, doctors and even Florence Nightingale during her career. Her films are worth seeing.

Ruth Chatterton is an automobile executive who hires a succession of handsome, young, male secretaries, and beds them. One secretary, engineer, George Brent, won’t sleep with her. Hijinks ensue. This is a whale of a pre-code film. It’s frank, modern and even a bit shocking. If this film were made in the 1970s, the boss would be a man, but the 30s were different.

It’s fun to see a trope turned on its ear. The acting is solid, and Chatterton has a lot of fun with the role.

If you want to watch a film about women, you should probably watch The Women. Myrna Loy, Rosalind Russell, Joan Crawford, Paulette Goddard, Joan Fontaine and even Hedda Hopper, the famous gossip columnist, who plays, you guessed it, a gossip columnist, star. Based on the play by Clare Boothe Luce and written by Anita Loos and Jane Murfin, The Women has an entirely female cast. Even the dogs and horses on screen are female. Yes, it’s a bit on the gossipy side, but it’s clever and funny and the women and their friendships take center stage.

The film is a quick-witted story of a group of privileged women, but even with all their maids and mansions, they have some of the same problems we do. They just have them on Park Avenue. It’s worth a look just for the weird fashion show in the middle of the film.

With the Hays Code in full flower, filmmakers had to do some fancy footwork to add a little spice to their films. While the pre-code freedom of the 1930s was over, Hollywood continued to turn out message films like Gentleman’s Agreement (1947), Sullivan’s Travels (1941), and Crossfire (1947). The film noir genre gave women a chance to be villains for a change, and some actresses, like Ann Sheridan, Barbara Stanwyck and Jane Greer relished their femme fatale roles.

Rosalind Russell and Cary Grant, along with a fantastic cast of character actors, trade wisecracks as reporters, covering the politically charged story of a convicted murderer awaiting execution. The dialogue, written by Ben Hecht and Charles MacArthur, is clever, witty and delivered at breakneck pace. Director Howard Hawks favored smart characters and overlapping, smart-ass conversations in his films and this one boasts some winners. The story’s not all one-liners and comebacks either. The film makes a few salient points about the politicization of crime and the lengths to which politicians and journalists will go to get or make the story.

One reason: Rosalind Russell. She’s terrific. As Hildy Johnson, Russell radiates intelligence, competence, strength and a boatload of attitude. She’s a hard-boiled reporter doing the same work as her male counterparts. The other reporters admire her and her boss, the conniving Cary Grant (who’s also her ex), can’t make it without her. She’s also hysterically funny.

Adapted from the Emlyn Williams play, The Corn Is Green tells the story of Lily Cristobel Moffatt (Bette Davis), who fights prejudice and the local gentry to start a school for poor children in a remote Welsh mining town. Moffatt’s intelligence, strong will and ability to work around the rules enable her to keep her school open and promote the academic career of her most promising student, played by John Dall. In 1979, Katharine Hepburn recreated the role in a television version of the film.

The fact that a woman could start her own business in 19th century Wales is impressive. She has no support and only a small piece of property and yet she pushes past the naysayers to make a go of it. Moffatt’s strength, perseverance and dedication to her students and to the concept of education are inspiring and Davis delivers a wonderful performance.

Katharine Hepburn and Spencer Tracy are lawyers on different sides of a controversial case. They’re also married. When their courtroom antics leak into their home life, it may cost them their marriage. That sounds pretty major, but this is a comedy with deft direction and timing and a talented cast, including Judy Holliday in her first major film role.

Hepburn and Tracy have a great on-screen rapport and the dialogue, by Ruth Gordon and Garson Kanin, is sharp as a knife. There’s no talk of Hepburn’s attorney quitting work or dropping it all to start a family. She’s a professional woman and that’s it. No one questions her choice and it’s a nice touch.

It wasn’t all June Cleaver and white bread. Filmmakers like Ida Lupino, Douglas Sirk, Nicholas Ray and Elia Kazan made films like Outrage (1950), Written on the Wind (1956), Johnny Guitar (1954), Rebel Without a Cause (1954) and On the Waterfront (1954), which dealt with rape, alcoholism, mental illness, teenage rebellion and organized crime. There were also a bunch of science fiction films with women scientists and doctors to challenge the myth that women had to stay home. People may have been watching Ozzie and Harriet on TV, but in movie theatres, they watched Alfred Hitchcock, Akira Kurasawa and giant, radioactive ants. It was a good time.

Margo Channing (Bette Davis) is the biggest star on Broadway. Surrounding her are a cadre of friends and enemies. In the theatre, it’s hard to tell which is which. She suspects someone in her circle is stabbing her in the back, but will her real friends support or betray her? The dialogue crackles and the cast, including George Sanders, Anne Baxter, Celeste Holm and a young Marilyn Monroe deliver their lines perfectly.

The acting, dialogue, direction, and story are first-rate, and the story of backstage fights and plots could have been made yesterday. It’s so much fun.

This epic film stars Elizabeth Taylor and Rock Hudson as a couple who meet at her family’s mansion and horse ranch in Maryland and fall in love instantly. Hudson takes her back to his huge Texas ranch and attempts to change her into a quiet, obedient wife. It doesn’t work. Giant follows the couple and their children over several decades, showing how they deal with gender roles, World War II, race relations, and other small issues. This was James Dean’s last film. He died during production. The film is as sprawling as Hudson’s 500,000+ acre ranch and shows, through this family, the changes taking place in the United States during this time.

In Giant, Elizabeth Taylor marries a powerful and old-fashioned man, but retains her identity and continues to assert herself despite pressure to toe the line. She advocates for the poor Mexican people in a nearby village, providing medical care and improved housing. She also speaks on behalf of her children who don’t necessarily want to follow in their father’s footsteps. It’s a wonderful role and Taylor is convincing as a woman who loves her husband but refuses to give up herself.

Efficiency expert Spencer Tracy rolls into Katharine Hepburn’s television network reference department, seemingly to replace her and the department with an electronic brain. The staff try to find out if they’re getting the axe, secretly plotting against the machine. This is a witty comedy with smart women executives navigating the corporate scene while attempting to have private lives.

Katharine Hepburn is smart, literate, and a terrific leader and mentor to her all-female staff. She encourages, praises, and teaches them, giving them credit and rooting for them to succeed and advance. She and Spencer Tracy, who were involved romantically for many years, have amazing chemistry on screen. Desk Set is a pleasure to watch.

Read our picks for the best business podcasts!