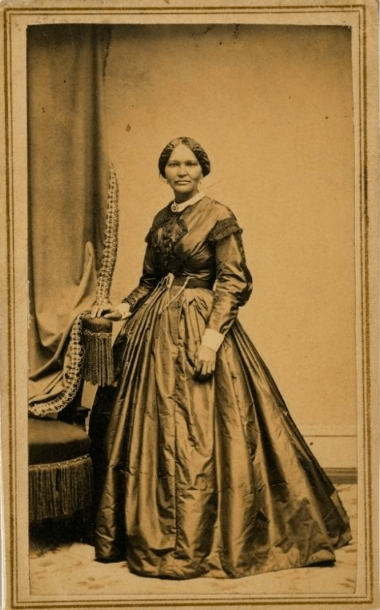 In an unparalleled era of national division, Elizabeth Hobbs Keckley managed to prove her business acumen despite the hideous racism and sexism of the time.

Born in February 1818 in Dinwiddie County, Virginia, Elizabeth Hobbs Keckley was the biological daughter of Colonel Armistead Burwell, a white plantation owner, and Agnes Hobbs, one of his slaves.

Following customs of the time, Elizabeth was born a slave despite the fact that her father was a white man. Although her father was the master of the plantation, she suffered the same unimaginably cruel violence as the other slaves. Her mother and her mother’s kind husband, a slave named George Pleasant Hobbs, lovingly raised her. Elizabeth learned the craft of dressmaking from Agnes, who was a talented seamstress herself.

In 1832, Colonel Burwell dispatched 14-year-old Elizabeth to North Carolina to serve as slave for his son and daughter-in-law. Elizabeth continued to be subjected to horrific beatings by her half-brother and his wife. The Burwells required Elizabeth to serve a local white man, who frequently raped her. She became pregnant, giving birth to a boy in 1839. She called the baby George, in honor of the man she considered to be her father.

In 1842, Colonel Burwell ordered Elizabeth to return to his Virginia plantation with her young son. Soon upon her return, Elizabeth became the property of Anne and Hugh Garland, the Colonel’s daughter and son-in-law.

By 1846, the Garlands were having serious financial troubles. Desperate for work, Hugh decided to relocate his family to St. Louis, Missouri. Elizabeth, Agnes, and George joined the family as their slaves.

The Garlands’ economic struggles continued, prompting Anne to suggest hiring out an aging Agnes to other families during the day to make money. Naturally, Elizabeth was aghast. She volunteered to work as a seamstress for the wealthy local ladies in an effort to keep her mother home. Her plan worked–the ladies of St. Louis loved her creations. However, all the money she earned went to her enslavers.

In the early 1850s, she wed James Keckley, a fugitive slave who falsely told her he was a free Black man. This early deception spelled trouble for their union and she eventually left him. In November of 1855, with the help of donations from her local clients, Elizabeth Hobbs Keckley secured the $1,200 required to buy freedom for her and her son. She had finally earned her freedom, but she still needed to work as a seamstress so she could support her family and save up enough money to repay those who had donated to her freedom.

Freedom in the capitol

Once she reimbursed her clients, she relocated to Washington, D.C. It was 1860 and the country was on the cusp of war. Newly free and in a bustling city, Elizabeth set out to rebuild her dressmaking business. To do so, she had to navigate complex district laws. With the help of a client from St. Louis, she gained an introduction to an elite group of Southern ladies. One of these women was Mississippi Senator Jefferson Davis’s wife, Varina Davis. Jefferson Davis would go on to become the president of the Confederate States during the Civil War years.

Soon, Elizabeth was working as a stylist to Varina and other upper-class women of the city. This job gained her access to an exclusive clique of people – the D.C. political elite. Tensions in the country were rising in the buildup to the Civil War. When the Davis’ decided to return to the South, Elizabeth declined to join them. She believed the North was more likely to emerge victorious.

Her position made her privy to discussions among the political elite about the probability of war. In early 1861, tensions were brewing and a new president, Abraham Lincoln, was coming in. Meanwhile, a client names Margaret McClean offered Elizabeth the chance of a lifetime. Mrs. McClean happened to be a friend of incoming first lady Mary Todd Lincoln and she knew that Mrs. Lincoln was looking for a personal stylist in Washington. She introduced Elizabeth to the first lady, setting in motion an extraordinary partnership.

Life with the Lincolns

Elizabeth worked for Mrs. Lincoln for the next four years, throughout the Lincoln presidency. They developed a deep friendship, which only strengthened when they each lost a beloved son. Elizabeth’s son, George, a Union soldier, died in action in 1861. Mrs. Lincoln’s son, Willie, died in early 1862. Elizabeth had tended to the boy as he died and witnessed firsthand the sixteenth president’s grief. After Willie Lincoln’s death, Mrs. Lincoln found great comfort in Elizabeth’s presence.

During these years, Elizabeth opened a shop in which she employed 20 workers. She even helped to establish a charity, the Contraband Relief Association, to help refugee slaves from the Southern states.

Everything changed in 1865 when the president was assassinated. Now Mrs. Lincoln was grieving her son and her husband. Elizabeth’s companionship continued to help Mrs. Lincoln during this time.

When a financially struggling Mrs. Lincoln asked Elizabeth to help her put some of her dresses up for sale in 1866, Elizabeth agreed. The media discovered Mrs. Lincoln’s plan and did not approve. The incident caused a minor scandal and Mrs. Lincoln fell into disfavor with the public. As time passed and the controversies grew, the women grew further apart.

In 1868, Elizabeth released her memoir, “Behind the Scenes, or, Thirty Years a Slave, and Four Years in the White House.” Her intention was to tell her personal story and to paint Mrs. Lincoln in a favorable light.

Though she meant well, the public reaction was overwhelmingly negative. White readers were aghast that a Black woman, born a slave, had the audacity to form friendships with high society white women and to subsequently write about them. Mrs. Lincoln herself was appalled by what she viewed as Elizabeth’s disloyalty.

The considerable controversy caused Elizabeth’s business to suffer and she had to find a new way to keep herself afloat. She was hired to serve as the head of the Department of Sewing and Domestic Science Arts at Wilberforce University in the early 1890s. Health problems forced her to retire in 1893.

When she died in 1907, at age 89, she had lost her son, her husband, and her thriving business. Still, her story remains an example of an industrious, ambitious businesswoman who achieved self-sufficiency against all odds. In October 2019, Elizabeth Hobbs Keckley was honored with a statue at the Virginia Women’s Monument at the State Capitol garden in Richmond.